On Nov 25, 2019
0
Share
Statues or sculptures are works of art that can communicate to people to experience three-dimensional shapes as well.
We can see many sculptures around the world from ancient times to show respect to the great god or king.
Until the present day, the work has started to have a variety of ideas and interpret different meanings.
Today, Petch Maya presents 9 sculptures around the world that tell stories and give insight in the modern era.
1. Knife Angel by Alfie Bradley, who persuades people to stop using violence. 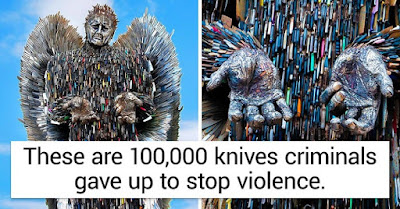 The great work presents an 8-meter angel sculpture created by knives of criminals who have thrown their weapons into the “knife bin” to stop the crime anymore.
Collected by police in England
The concept was created by a group of fairy knives traveling throughout England to educate people on the issues of using sharp knives and weapons hazards.
2. The Passer-Through-Walls by Sean Makrés, the last scene in a famous French novel

Le Passe-Muraille is a famous French novel by Marcella Maye that tells the story of a modern company employee who finds himself with magical powers that can walk through walls.
But instead he uses the power of being a thief one day, he escaped from prison, but his power disappeared as he walked through the wall, causing him to stay in the wall forever.
3. Building Bridges by Lorenzo Quinn. Share the formula for a better world.

Italian artists have created works that represent ingredients that make the world a better place: friendship, wisdom, help, faith, hope and love.
The sculpture is transformed into a form of 6 hands that are combined into a bridge connecting them.
4. Corporate Head by Terry Allen tells the story of the dangers of working for profit.

Life-size sculpture with a head in the wall in Los Angeles United States which means the businessmen who seek profit for themselves and the company. Where he was outside the office, only the body, but the head was absorbed by the office and not released.
5. Sphere Within a Sphere by Arnaldo Pomodoro reminds us of a fragile world

Beautiful and astonishing sculptures present complex and massive structures with inner details. Conveys everything in the universe linked together and our world is so fragile and very easy to break apart
6. The Man Who Measures the Clouds by Jan Farr tells the struggle to measure things that cannot be measured.

A unique piece measuring 9 meters in size, presenting a man trying to measure clouds with a ruler. By communicating people who are trying to do things that are impossible as we have never ceased to develop ourselves as humanity Or the ancient philosophy says that humans are a measure of everything
7. Inertia and The Bankers, by Jason De Says Taylor, speaks about social issues and demands our responsibility.

8. Many underwater sculptures have revealed modern social problems that are materialistic and too influenced by the media.

This great work also serves as a home for corals and marine organisms at risk of extinction in many parts of the world. Artists try to communicate the protection of our planet and pay attention to the extreme climate.
9. Absorbed by Light by Kali Lucas and Calline Heinz who tell us too much about their passion for equipment and technology.

Sculpture of 3 people sitting on a bench all of which stared at the smartphone to ignore each other.
The presentation is about how we live our lives in connection with modern technology and disconnect from real life.
10. The Miraculous Journey by Damian Hears illustrates the growth period of an unborn baby.

This amazing sculpture is located at the Medical and Research Center in Doha, Qatar. It consists of 14 sculptures, presenting the period of growth of a baby in the womb to the date of birth.
Conveys the courageous journey in our lives the work has been so controversial among Eastern audiences that it sometimes covers the work.
0
Share

This Japanese Girl Artist Change The Cardboard Into Everything You Want