On Sep 6, 2019
0
Share
Many cartoon characters marked our lives, some of them we met as children and later as adults, we could even see their children. But others were frozen in their childhood, being somewhat unfair or at least there are those who consider it that way and decided to change it.
In this regard, some artists used their talent and created interesting adult versions of several of the most famous animated characters and we show them below.
01. Moana 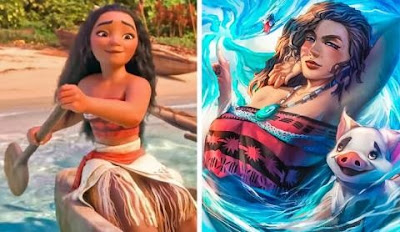 It is said Moana is the new queen of the sea, found harmony, still remembers her friends and maintains her belief in the power of singing.
02. Boo of Monsters Inc.

He is a journalist, he loves to discover mysteries and he is not afraid of monsters, he hopes to tell the stories of his childhood to his children.
03. Dora de Dora the Explorer

She is strong and muscular, she looks for wonders all over the world with her old friend.
04. Lilo de Lilo & Stitch

She is an anthropologist, Stitch is still her best friend and together they travel and meet people and great stories every day.
05. Scooby and Shaggy from Scooby-Doo

They are still best friends and share pizza nights and memories of their adventures, although they are always ready to run away from a monster.
06. Lisa Simpson of The Simpsons

She is an elegant woman, lives in New York and works in a major corporation, divorced and recently began a relationship with Nelson.
07. Toulouse, Marie and Berlioz of The Aristocats

The little cats are already adults and aristocrats, they opened a coffee shop and they give free food to homeless cats and dogs and singing and painting classes to the little ones.
08. Ash Ketchum from Pokémon

He is a Pokemon teacher and has a school where he teaches young Pokémon trainers, has captured friends all over the world.
09. Marceline, The Vampire Queen from Adventure Time

She is a rock star and is always on tour with her band while supporting feminism.
10. Violet Parr from The Incredibles

She is an adult and super heroine with new super powers, lives alone in a rented apartment, but visits her parents and together they defeat villains.
11. Mulan and General Li Shang from Mulan

Being an adult also means getting old, so some artists draw Disney characters as elders, for example, Mulan and Li Shang who are still in love.
Which illustration did you like best? Do you think the characters look like their children’s version? Share your opinion in the comments.
0
Share